There are four ‘perfect’ words that can make this wench’s heart flutter and jump into action quicker than Mo Farrah around a track. OK, I exaggerate a little here. Obviously Mo’s an Olympic athlete, but I still reckon if it was a beer drinking challenge, I would be taking home the gold!

So, those four little words..

Boss bird, #hottieintheoffice and I immediately ordered our limousine and headed to Lye Cricket Club for some real ale consumption. OK, I’m exaggerating again. I hailed one of Stourbridge’s finest taxis. The limousine (yes there was one there) appeared to be for a wedding at the Football Club next door, which prompted much discussion between boss bird and I about how brilliant it would be to have your wedding reception at a beer festival. I just have to find that (un)lucky beer loving Black Country mon to propose to me. All for the beer of course! 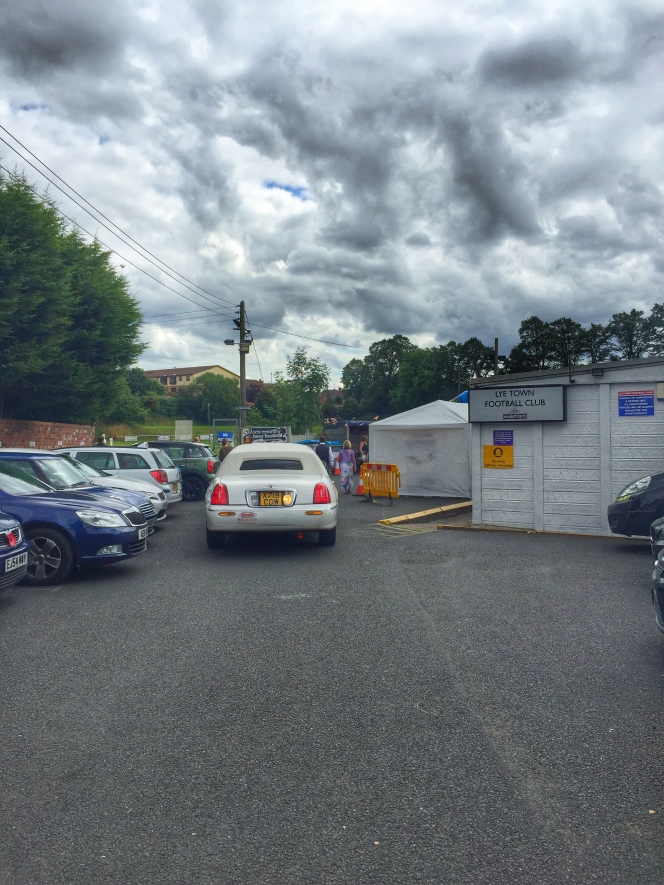 The Black Country Beer Festival, set up by Sadler’s Ales and Lye Cricket Club takes place every year, over three August days. It seemed that Saturday was the perfect day to enjoy some bostin beer in the gorgeous sunshine. 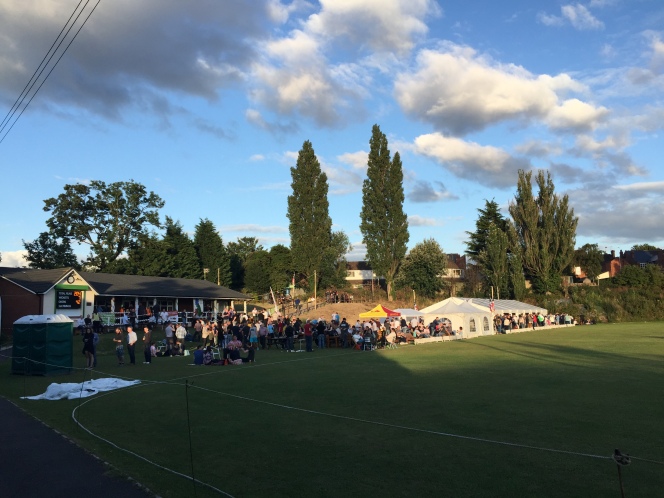 The festival’s ale selection was following a ‘John O’Groats to Land’s End’ theme, meaning a large selection of the ales were sourced from along a route from John O’Groats to Land’s End. A little further than our Wollaston to Lye journey. Local ales were well represented and The Cricket Pavilion Bar was sponsored by Green Duck Brewery. After paying our way, and getting our glass and vouchers, next came the hard bit. Where to start?! 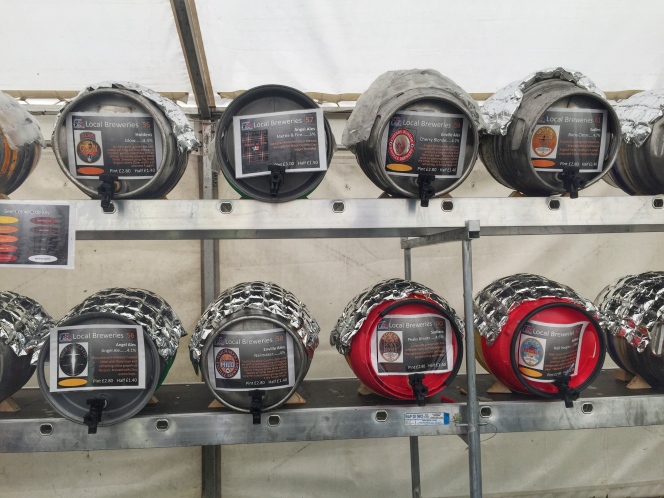 We decided to stay local for the first round. Boss bird thought it would be funny to go for Shag Boss (Holden’s) although we’d like to state this isn’t a comment on our relationship (!) with #hottieintheoffice going for a pint of Peaky Blinder (Sadler’s). Pretty familiar beer for us, but ain’t nothing wrong with going for a bit of what you know!

For our next round we ventured a little further, or in this wench’s case, quite far indeed. I chose the lovely Northern Light (Orkney), boss bird went for Dark Mild (Jennings) while #hottieintheoffice only went down the road for his Nailmaker (Enville).

We were soon joined by a friend and her exuberant daughter who, at under two, wasn’t so much a fan of beer or cricket, as she was of running away and being chased. Who could blame her? The sun was shining and there were lots of interesting Black Country folk to say hello to. 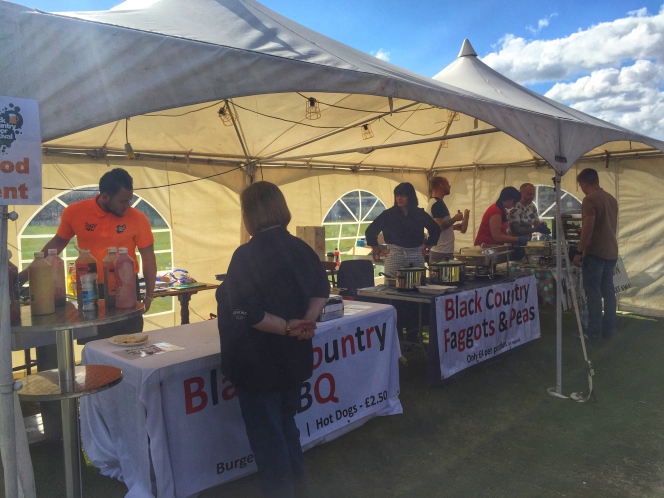 The Black Country BBQ, and faggots and peas, seemed popular and smelt wonderful, but we filled up with beer instead.

Our next round consisted of Peach Melbear (Beartown Beer) for boss bird and I, and Even Keel (Keltec) for #hottieintheoffice, both of which were really tasty. We decided it was only polite to pay a visit to the sponsors of the Cricket Pavilion bar. Well, any excuse to sup Green Duck ale. 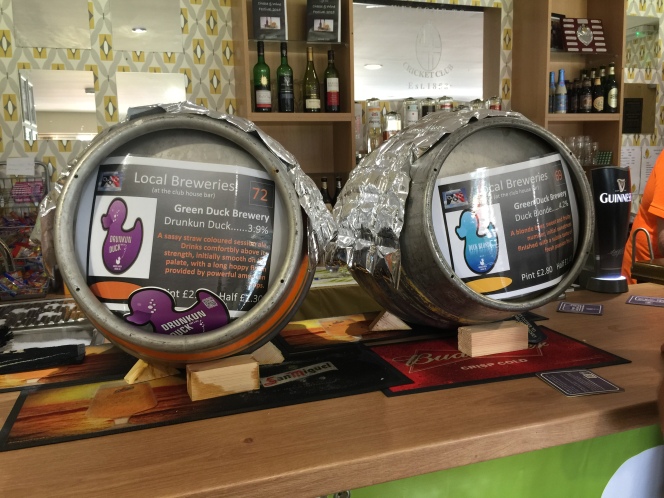 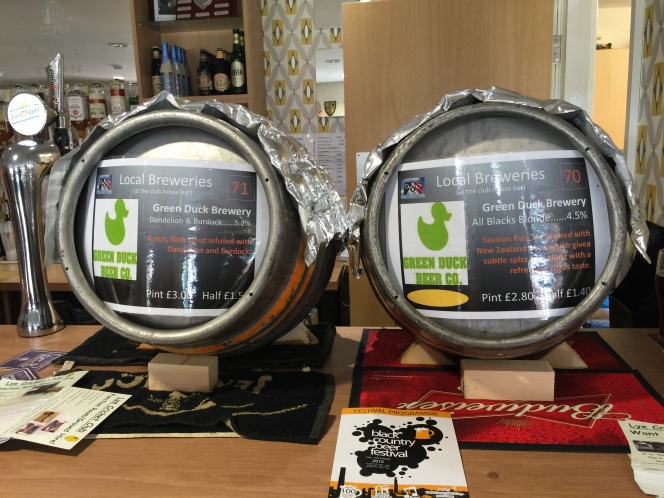 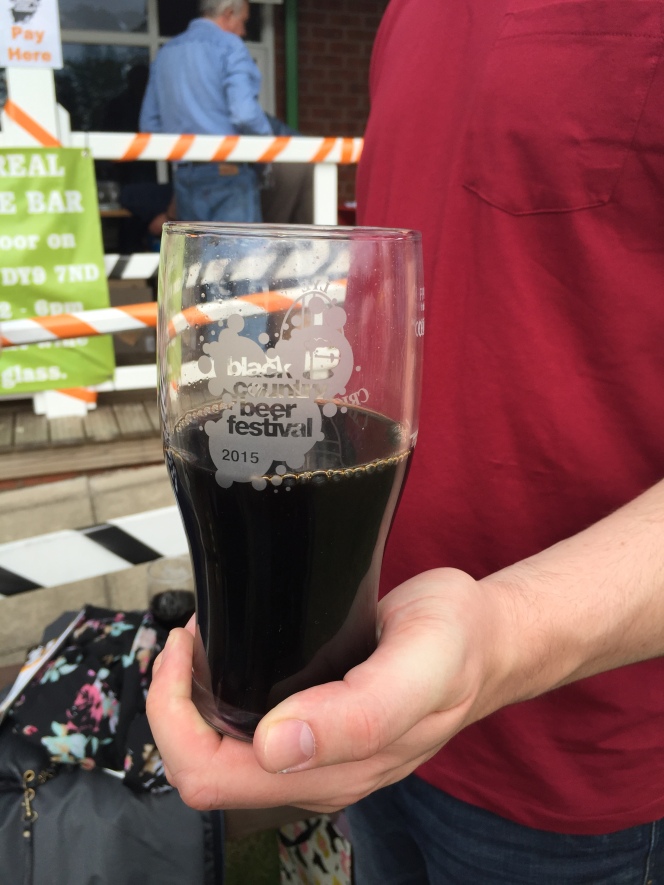 It had to be Dandelion and Burduck (Green Duck) for us.

So much on offer at Black Country Beer Festival – as you can see in this listing from the event – but with bellies almost full of beer and cider we decided to head home and fill the remaining space with fantastic fish n chips from Wollaston Fish Bar.

A super Saturday afternoon. Roll on next year babs. I’ll be there.