In 1981, singer Shakin Stevens was on his knees looking through keyholes and asking that very question in his number one hit, Green Door. Nowadays, that kind of voyeurism can get you arrested, so in 2015, as I was asking the very same question about a mysterious green door on a Stourbridge industrial estate, I got off my knees and ventured inside Green Duck Brewery for September’s MABFest: a beer festival set up to celebrate the formation of the Mercian Alliance of Brewers (an alliance to promote breweries throughout the local region).

When you’re venturing into unchartered territory it’s never wise to do so alone, so I asked my top class entourage: wench 2 and chap to escort me.

I’m not sure what I expected from Green Duck (apart from all the great ale I’d already sampled), but I know that I didn’t expect what I got. Once through that tantalising green door, the space opens up beautifully. Full of surprisingly comfy benches and tables, a vintage-style lounge area, well-stocked bar and view into the brewery itself, it definitely had the wow factor for me. In fact, I think ‘wow’ was uttered on more than one occasion. 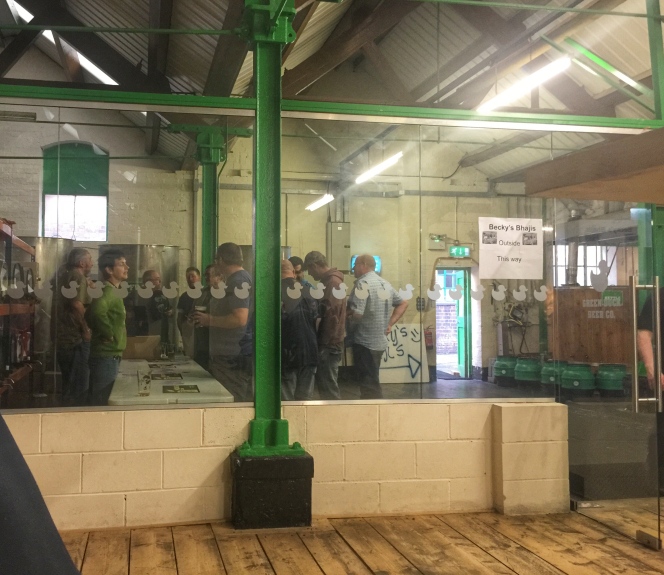 Aren’t we a lucky Black Country lot with these bostin brewers on our doorstep? 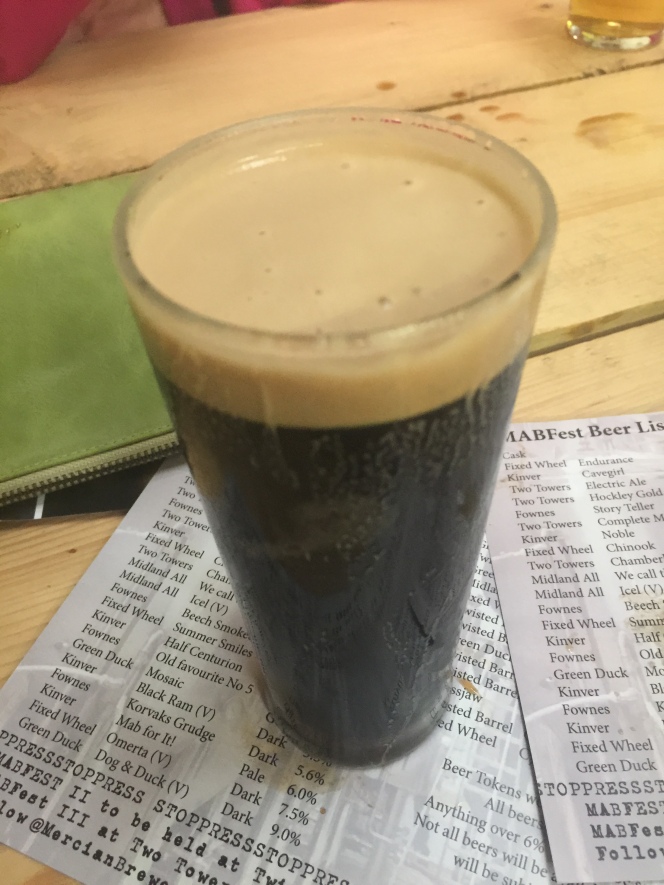 Amongst those we sampled were Storyteller (Fownes), Half Centurion (Kinver), God’s Twisted Sister (Twisted Barrel), Single Speed Chinook (Fixed Wheel), Dandelion and Burduck (Green Duck) and Inspired (Twisted Barrel). This list is not comprehensive as we probably forgot some (hiccup).

We needed something to absorb all that fine beer and thankfully Green Duck had another surprise for us, just the other side of the back door (green of course)!

Not really much of a surprise I suppose, as Green Duck had helpfully signposted Becky’s Bhajis, but I have a theme running here and I’m sticking to it.

It was the lovely Becky herself who suggested that we should be careful when eating the chillies and not to eat right down to the stem. Always one to misbehave, I didn’t really listen to her advice and had to spend five minutes with my tongue submerged in a pint of finest ale to cool off (not such a bad outcome after all). Wench 2 muttered ‘I told you so’. 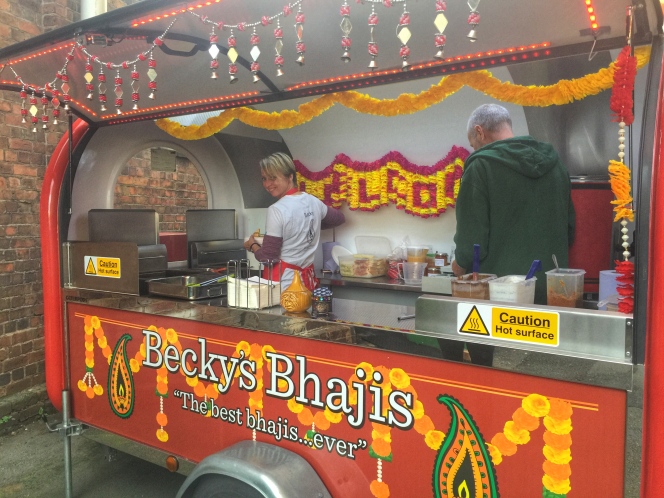 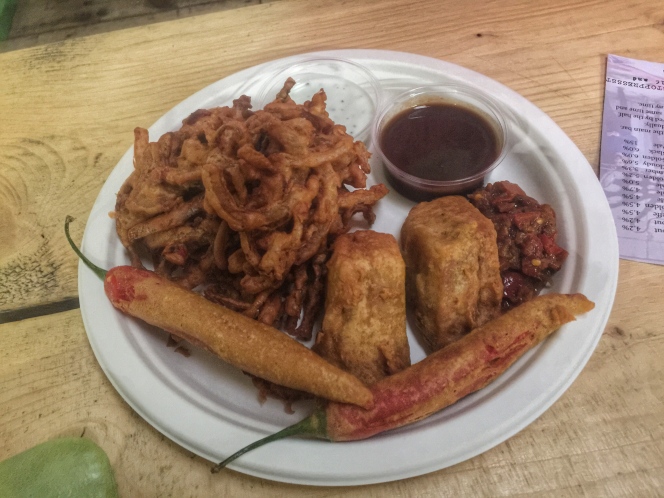 We almost tried the 15% Cyclone brewed by Fixed Wheel, but weren’t quite brave enough after our earlier consumption, so we headed home full and happy, and mightily impressed with Green Duck.

Oktoberfest came to Green Duck in…wait for it…late October and on a very rainy Saturday afternoon I decided to surprise (show off to) boss bird by showing her what was behind the green door. Once we arrived at Rufford Road, as if by magic, the rain stopped, the clouds started to clear and the sun put his hat on.

Although we’d arrived just after it opened, Green Duck was already busy with Stourbridge FC supporters. This cheerful bunch soon headed off to glory leaving us a little quieter, but boss bird was able to take in more of her surroundings. Lots of complementary words were uttered and she particularly perked up when I mentioned you can also hire the brewery as a venue. 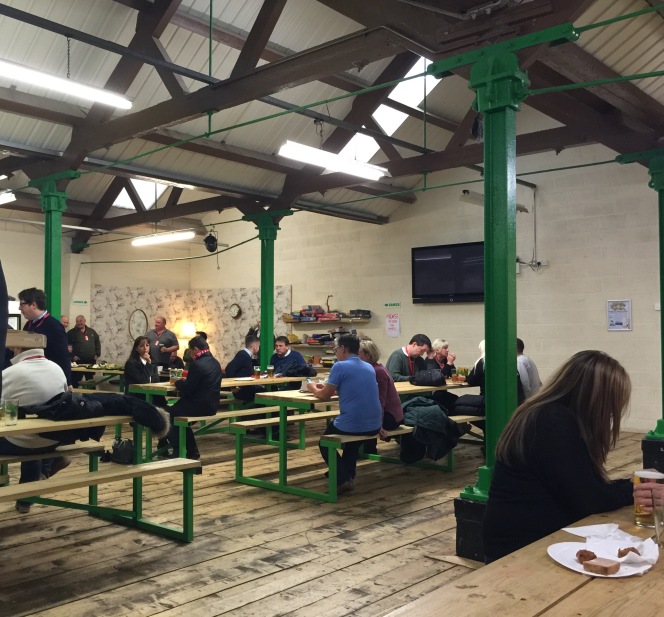 After all that beer and cider, boss bird started to talk about how perfect Green Duck would be for a wedding venue. Although I agree entirely, I suspected she may be in need for some food so we wandered over to Andy’s Low ‘N’ Slow for some of his pulled pork. 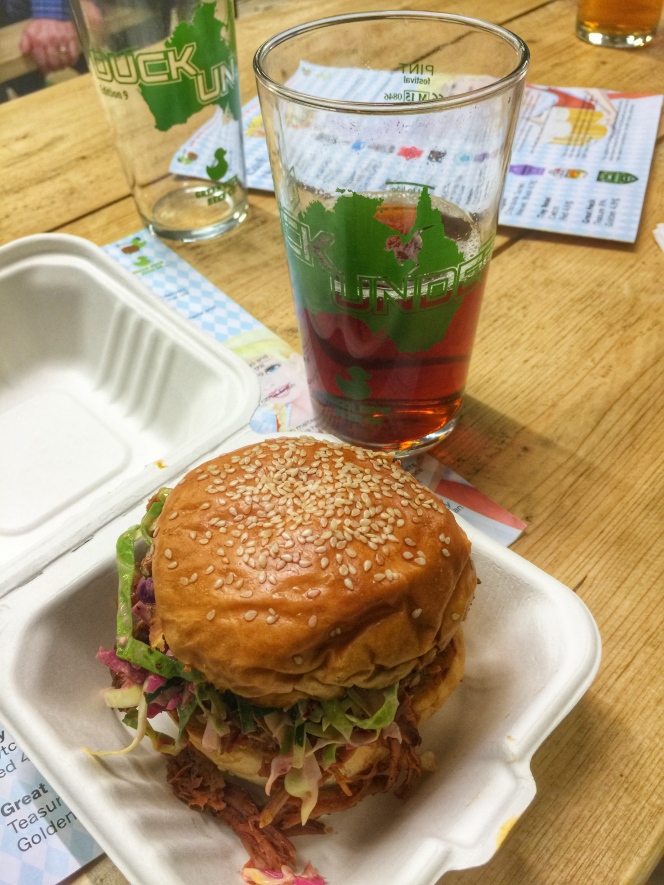 That pulled pork bap was the food of the gods. That is all.

By this point the place was filling quite nicely with happy Black Country folk all settling down to watch the rugby. Green Duck is the sort of warm, friendly place where you can take your friends, your kids, your dog, your family, your bike, your grannie….you should take your grannie, it’ll be the best fun she’s had for ages. You get the idea.

Alas it was time to go out that green door and I felt quite sad. Until next time…

The last time I fell in love with a green duck I was probably about ten and his name was Orville. Unfortunately (for Orville) he had Keith Harris’s hand up his bum at the time, but when Keith sang ‘I’m going to help you mend your broken heart’ to him it wasn’t at all creepy (to this ten-year-old) and thus began a long-lasting relationship between man and duck. I’d like to feel the same about us Green Duck. The beginning of a long-lasting relationship between wench and brewery. Only this time there’s no need for a hand up the bum or a sad song. 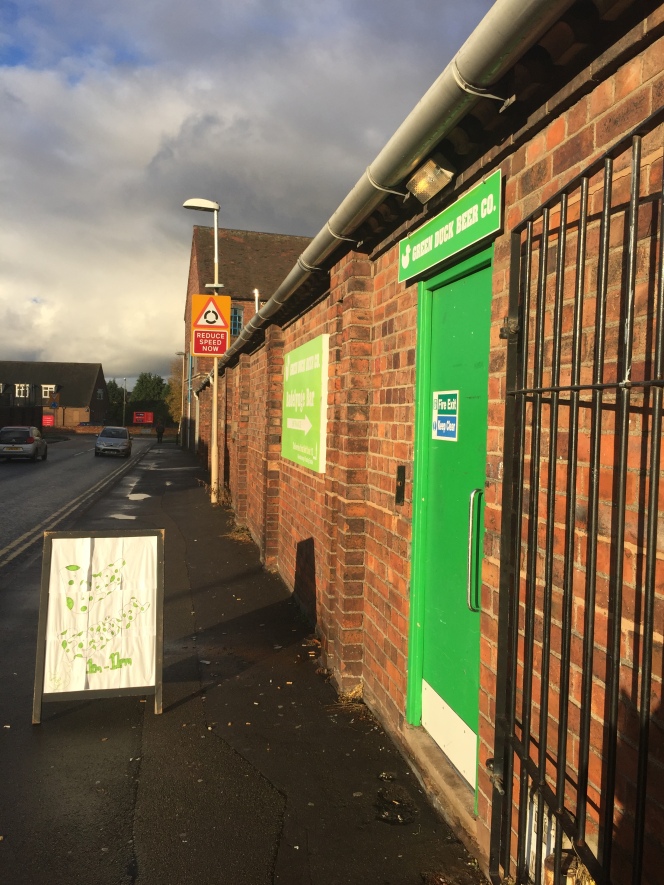