I consider myself a wench up for new adventures.

I’m always the one that stops at that pub others don’t look twice at, eager to discover the beery world behind the windows. I’m usually the one persuading people to join me for just one pint there…’we can leave if it’s really bad’…knowing, as I do, that we’re more than likely to spend the rest of the night there, beer bonding with new friends, as you do in our bostin Black Country.

But, this time, it was boss bird who suggested a new adventure. Drinking port in a very old cellar. Now I was apprehensive for the following reasons:

Boss bird, however, was keen to reassure me:

So off we went – wench, boss bird, #hottieintheoffice and sir – to that very old cellar below the very old Nickolls and Perks (N&P): a lovely wine merchant in Stourbridge.

Now I do already frequent N&P. I know, yow cor believe it can yow? What’s an unsophisticated wench like me doing hanging about in such a fine establishment. Well, aside from my love of beer, I like to think I’m something of a whisky connoisseur. So if I’m not buying it up there in the land of mountains and lochs, I’m usually perusing the shelves at N&P. Anyway I digress…

…on arriving at N&P we were met by a friendly gentlemen offering a glass of pink port and strawberries. I immediately knew I was going to like him. My first ever pink port, the Rose Porto (Kopke) was delicious. My only concern was the generosity of our hosts who were filling my glass again before I’d set foot down those stairs. 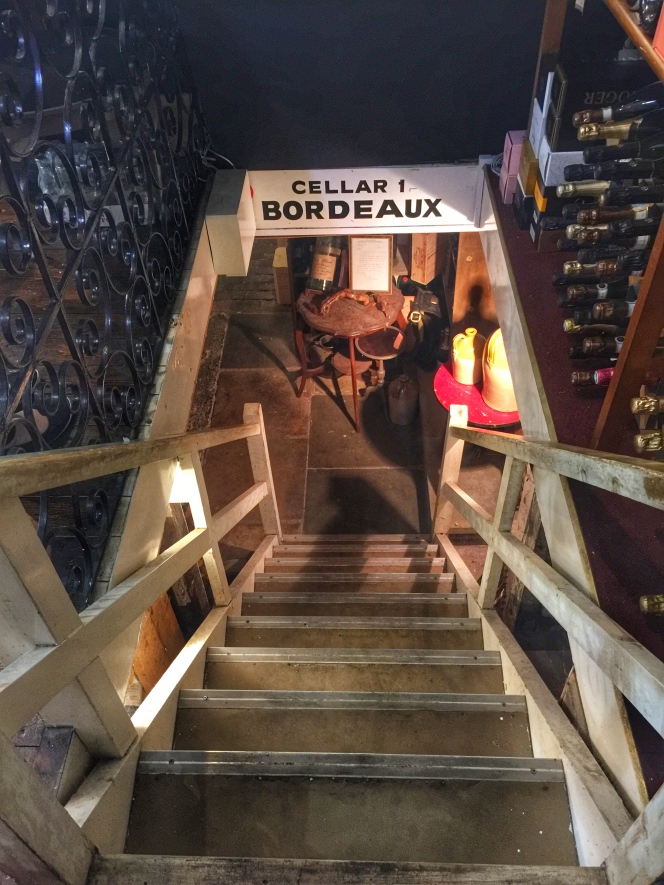 So with #hottieintheoffice bringing up the rear (ooh err missus) and very kindly carrying everything but the kitchen sink, I managed to find my way to Bordeaux. Who knew the channel tunnel had a stop in Stourbridge?

Down in the very old cellar we found ourselves a nice little corner, somewhere to hide the unsophisticated wench. T’was rather cosy tucked into an alcove surrounded by bottles.

It was then time to be introduced to the friendly gentleman who’d plied us with pink port. Joao Tamagnini Belo, International Business Manager at Sogevinus (the company who produce Kopke port). Now he didn’t sound very Portuguese, but assured us he was, and as he was pouring the port I wasn’t one to argue.

And off we went with our tasting, talking tour of Kopke port. Now I have to say thank you here to #hottieintheoffice. Not just a pretty face, he made notes while I took the pictures.

We started with the 10-year-old white which we all agreed was very nice (thanks to sir for being our resident hand model), followed by a 10-year-old tawny. 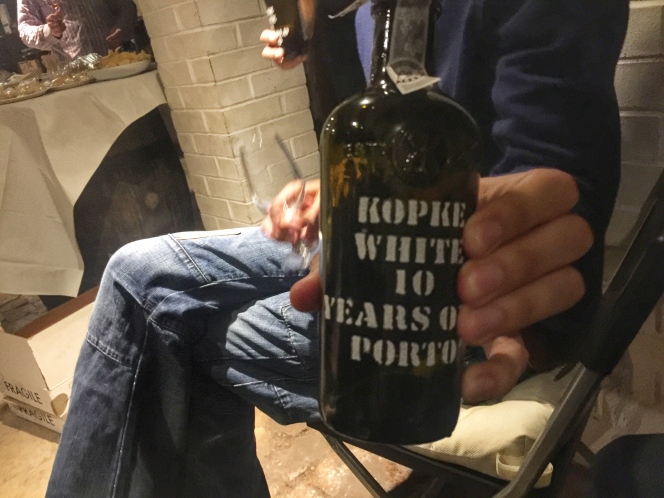 There was some discussion about the correct temperature for port, so we compared the tawny at room temperature and chilled. The consensus in the cellar seemed to be chilled was preferred. Our host explained that modern, centrally heated homes are so much warmer now and that room temperature for some alcohol may be too warm, therefore chilling your drinks is not unexpected. I’m lucky enough to have a cellar, not quite as old or well stocked as N&P, but it’s cool and dark and it’s where my little collection lives.

After a little nibble on two of my favourite things, Amaretti biscuits and white chocolate, we moved on to a 30-year-old white which our notes say was: ‘really good, best yet’. Let’s not get too excited by this…I have a feeling this may change.

Our host came around pouring and chatting which was preferable to a continuous talk, and meant that everyone got a chance to ask questions in our little groups.

We loved the simple design on the bottles and our host confirmed they were hand painted (using a stencil one presumes).

Our knowledgeable host was fascinating to listen to, and he was really broadening my knowledge and interest in port. A drink I like, but hadn’t ever really appreciated. We soon moved on to a Colheita 1998 (‘really good and probably better than the one we just said was the best yet’), 1976 and 1966.

A great night, but then our host and N&P unleashed the daddy. A 1957 Colheita. We had arrived at the height of sophistication, drinking a £190 bottle of port and eating cubes of Waitrose edam from our knees. 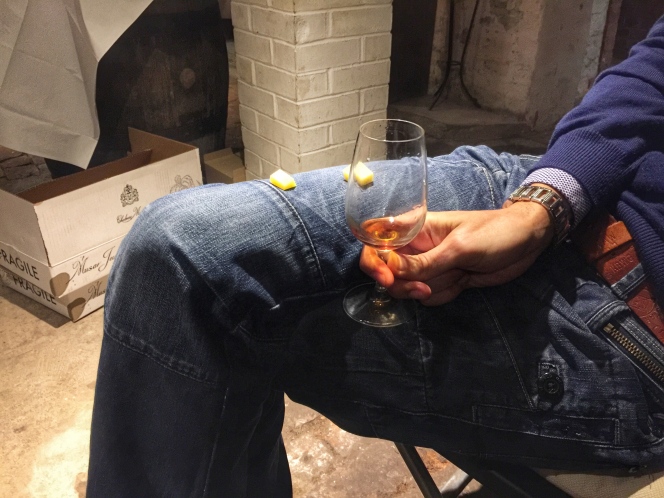 It was heaven. I was rather sad when we had to bid goodbye to our very old cellar. I would have liked to have been locked in there, with the expensive port and the nibbles. I did suggest I could help with a stocktake, but N&P didn’t hear me. It must have been the noise of the merry port revellers exiting the cellar. My attempts at hiding myself in Burgundy & Rhone were thwarted by boss bird shouting loudly ‘are you OK getting back up the stairs?’. Damn her! 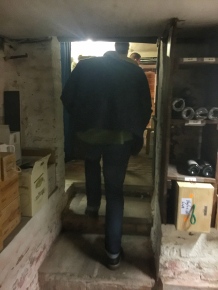 Surviving the climb there was just enough time to peruse the wares and decide what to take home. This was difficult as I’d enjoyed all and couldn’t decide.

I finally chose the Rose Porte and 10-year-old white, although I know I’ll be back to try more when they’ve gone. My friends know I have a hidden weakness for a cocktail cherry or two, so I couldn’t resist these rather expensive Jack Rudy cocktail cherries soaked in Bourbon!

We certainly left N&P better informed, more refined and happier than when we entered. I do love this shop and it’s very old cellar. It could only be improved if it started to stock more beer. Nickolls and Perks run regular events which are advertised on their website. I know I’ll be returning to the cellar if they’ll have me. I’m looking forward to learning more, drinking more and eating more nibbles off my knees.

And from knees to feet.

A final footnote would read: for those regular readers who fear this wench has gone all upmarket, I’d like to say…we went straight for a curry and I woke up the next morning to a text reminder of our tasting, topped and tailed accordingly… 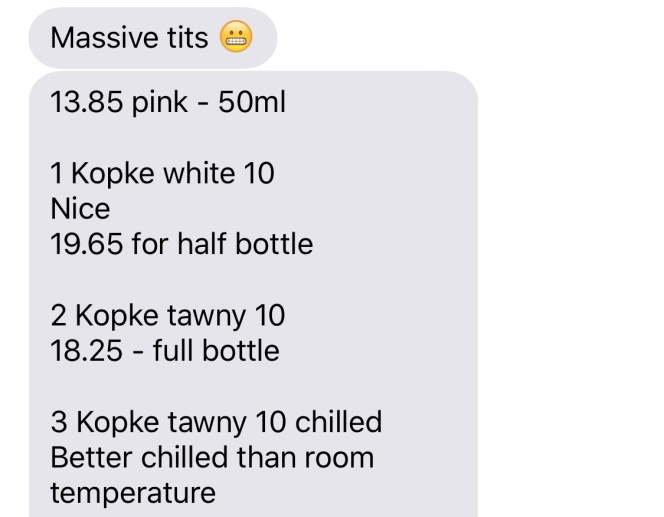