Now I have a soft spot for the sometimes-maligned town. I was born in Dudley and have it on good (family) authority that it was a lovely town, before ‘The Merry Hill’ (Merry Hell) seduced us all away into soulless shopping hell. I often think you can tell how Black Country you are by your reference to this mecca for mainstream, middle-of-the-road merchandise. Most people I know refer to ‘going up The Merry Hill’, as if they’re embarking on a joyful climb to some beautiful summit, rather than fighting against a sea of queuing cars skirting the side of M&S.

It was as a babby wench that I really got my first experience of Dudley, through an introduction to the legendary local music club, Dudley JBs. From the moment my feet first stuck to the carpet in this dark, dingy venue I was hooked. I drank many pints, saw many great bands and fell in love many times (often from afar). Ah, I still get butterflies when I think of that certain long-haired, grey hoody and DM wearing, Dudley boy I never got to kiss.

A golden time indeed with many tales I could tell and some I definitely shouldn’t. But, our experience of Dudley town itself was quite limited, as my friends and I had a regular routine:

So where to start our tour of Dudley?

Unfortunately The Three Crowns doesn’t do real ale so it was onto the next public house, passing one of my favourite buildings; the iconic 1930s Co-Operative Department Store. A building I never really appreciated as I staggered past on the way to pizza and taxi. It’s a real shame that many other buildings in Dudley are left looking a bit tired. 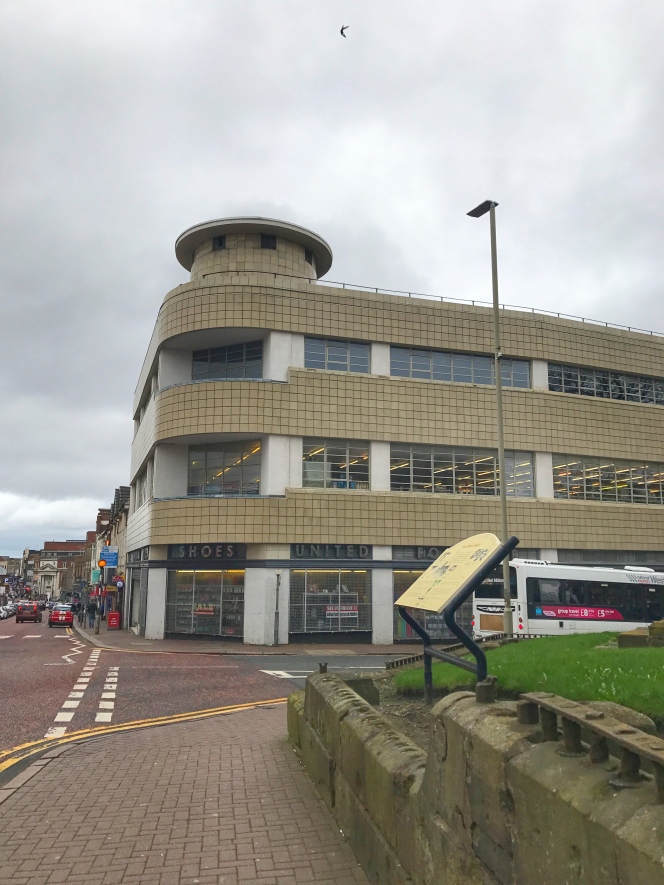 In desperate need of our first sup of ale we decided to stop at The Little Barrel on the High Street. After a quick glance at what was on offer, we established there was nothing for us discerning wenches, and even the fact that spiderman and batman were casually propping up the bar couldn’t tempt us. Yes really. Time had not been kind to those action heroes.

At this point we weren’t too concerned with the lack of real ale because we knew trusty JD Wetherspoon would deliver something. Onto The Full Moon, proudly advertising the ‘order and pay from your phone’ app, just in case you’re unable to wander the few steps to the bar to get your drinks.

There before us beer-aplenty, well until the very grumpy barman told us everything was off! I think he was so miserable because he had to keep repeating this devastating news to thirsty customers. Should have put a sign up bab. You managed it for the ‘guess the name of the dog’ competition. We ended up plumping for what was left in the fridge: Treason West Coast IPA (Uprising) and Punk IPA (Brewdog).

With not much else on offer in The Full Moon, and trapped between an emo couple staring into each other’s eyes and an elderly gent snoozing behind his newspaper, we decided to try elsewhere.

As we walked down to Stone Street Square we decided to nip into The Griffin, not put off by the Marston’s sign. What did put us off was the lack of beer we wanted to drink. Again, Black Country batman and spiderman watched in amusement as two strange wenches took one look at the pumps and left. I’m not sure if they were following us or we were following them.

I took the opportunity of us being ale-less to show wench #2 some of Dudley’s beautiful architecture, including the lovely Fountain Arcade. At this point I felt we were on more of a historic town tour than real ale tour. 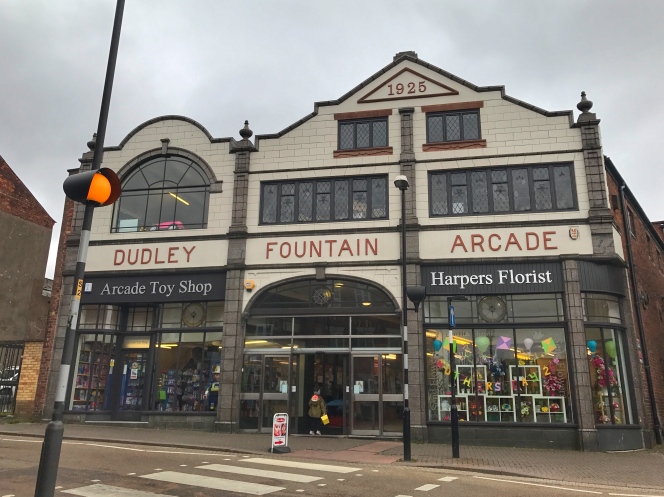 We wondered about The Glass House restaurant and bar in Stone Street Square. Then wondered why it was shut.

We wandered into The Saracens Head where my parents held their wedding reception, but wandered out again because, although the beer was slightly better, it wasn’t quite what we wanted.

I was now wondering if Dudley was going to disappoint.

So we wandered somewhere I knew would deliver for us. Past Saturday Books, on the opposite corner to the cop shop and with a view of Dudley Castle just behind, proudly sits The Court House. A friendly public house that sells real beer.

This Black Country Ales pub always has a great selection of ales available and it certainly did not disappoint. 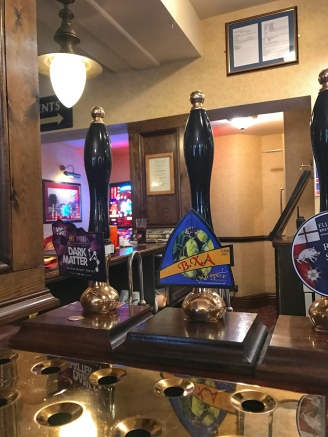 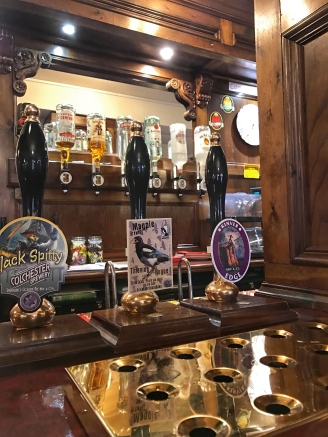 It was an oasis in the Dudley desert, an absolute bloody oasis. I didn’t know quite where to start but soon gathered my thoughts enough to order beer and scratchings. Due to being in a ‘lack of beer brain fog’ I’ve completely forgotten what we ended up drinking in The Court House, other than the fact that I started with a lovely blackcurrant porter, Dark Matter (Vale of Glamorgan). I felt so happy.

After a couple of rounds, it was with some trepidation that we chose to break away from the comfort of The Court House. We bid a sad farewell to the friendly bar wench and chap, and glanced longingly for one last time at the real ales board.

‘Are you feeling brave?’ I asked wench #2. She looked a little bewildered and didn’t get the chance to answer as we dodged a fight between a taxi driver and his departing passengers. Seizing my opportunity, I led her past the empty market and Duncan Edwards statue, and onto our next destination.

The last time I’d been in this pub was many years ago when a friend of mine was working on Dudley market. I wasn’t sure what to expect in the 2017 version, but I suspected it would be an interesting experience. I was not wrong.

Squeezed between a low-cost food supermarket and a chicken shop is the 1960s style pub The Castle. Wench #2’s eyebrow shot up. I held my nerve. Like the proper Black Country wench she is, she looked the pub up and down, and walked in the door.

It was about 3pm when we entered The Castle. I’d like to say the music stopped and everyone stared when we walked in, but the karaoke was in full swing and nobody was stopping the person killing whatever song it should have been. The staring did happen though. An obvious ‘locals pub’ we were met with a mix of bemusement, interest and suspicion. It was only a few paces to the very busy bar and to establish there was not a snifter of good beer to be found. It would have been so easy to turn on our heels and make a sharp exit.

We looked around. We looked at each other. We smiled. We knew we had found our pub for the afternoon.

At the bar wench #2 ordered us a trusty gin and tonic. It came in a half-pint glass with no ice. Wench #2 slid the glasses back across to the bar wench and politely asked, ‘bit of ice bab?’ Two chaps said hello and introduced themselves. One told us to be careful of the other because he was out of prison for the weekend. ‘Aren’t we all I said?’ ‘Oooh what you been in for?’ he replied. I tapped my nose and winked.

We made our way to the back of the room to enjoy the singing. At this point I’d like to mention that I didn’t really take any pictures on this visit, but I did manage to capture a bit of the atmosphere with some video. If you’re a Quo fan you may enjoy it.

After a while a group of regulars decided to make us feel at home, and we enjoyed copious amounts of banter and singing, and a few more G&Ts (now with ice). We also met the self-titled ‘Rocker Dave’ which was an absolute joy because ‘Rocker Dave’ punctuates the end of nearly every sentence he speaks with an infectious chuckle / cackle. As demonstrated here:

‘Rocker Dave’ and I may now be engaged as he proposed following an assurance of his moral standing. I didn’t say yes, but equally I didn’t say no. Well if yow am in a castle yow need a Prince Charming dow ya?

We also met ‘creepy Martin*’ (so named by wench #2). Martin kept apologising to us for all the swearing. Wench #2 decided he was definitely a serial killer which was a little disconcerting as he kept trying to hold my hand and I left with his phone number (always good to be polite to potential serial killers).

*not his real name

There’s a brilliant ten minute video I captured because I hadn’t realised I’d left the app open on my iPhone. A lot of the action is shown through my glass but not all. There’s deep conversation about love and life, air guitar, dancing and terrible singing (mostly from me). In the interest of protecting myself and wench #2 I am not posting it. No one needs to see her air guitar or hear my singing. Trust me.

We only decided to leave The Castle when ‘Rocker Dave’ left us for a Netherton pub (not Ma Pardoes) and the bar wench informed us we had drunk The Castle dry of tonic water (?!). We were distraught. Not by the loss of the tonic, but at the loss of our new friend ‘Rocker Dave’.

Not wanting to go down the path of drinking straight gin and crying in the toilets, we decided it was time to depart. We were both genuinely sad.

A short amble past the medieval Green Man Passage and we found ourselves at The Fellows pub, just beneath the castle and zoo. 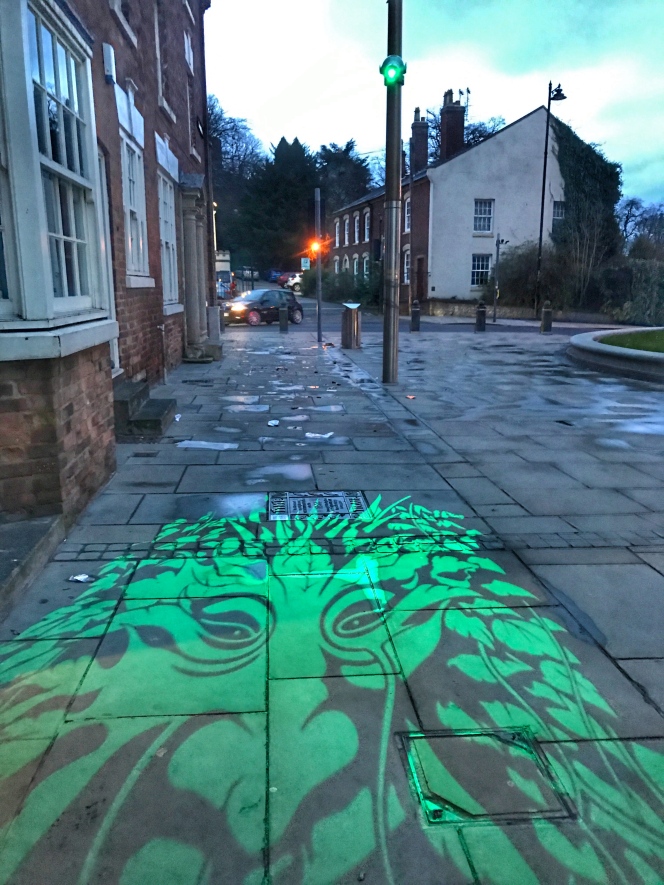 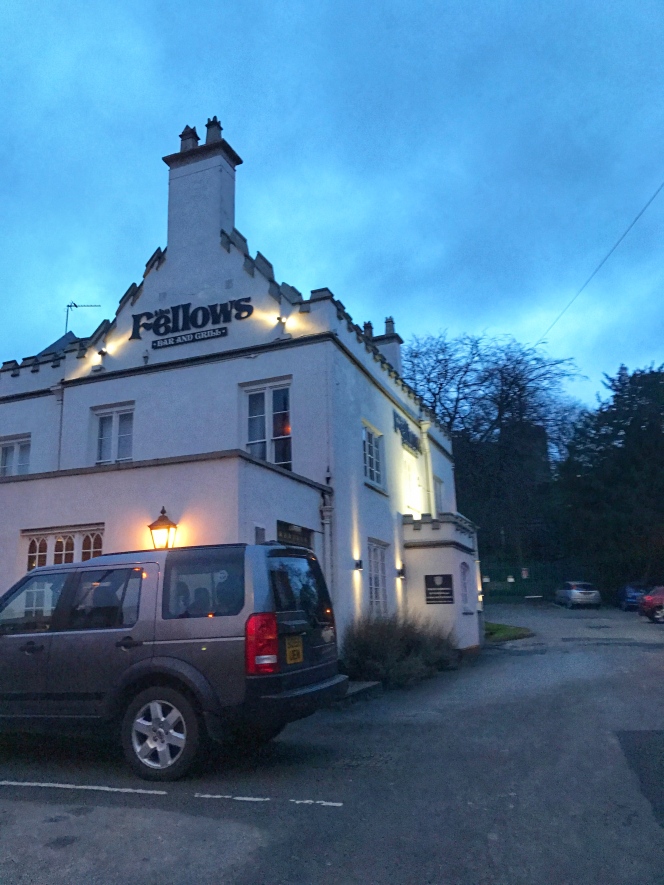 One drink later and wanting a curry, we decided to leave. No offence to The Fellows (which seemed a lovely place with good beer too courtesy of Holdens!), but after an afternoon in The Castle every pub, everything, everywhere, just seemed too sedate. We missed ‘Rocker Dave’ too.

Thanks to The Castle our dull and dreary afternoon in Dudley was anything but. You don’t sell proper beer, but I’m looking forward to our next visit. I’ll even bring my own tonic water.